Reviewing the wind turbine theory of operation for better understanding is necessary for proper maintenance decision making, and can lead to increased production. 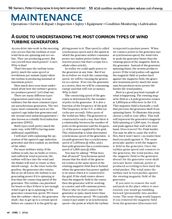 My career in wind started in 1985 as a wind turbine technician. Back then, U.S. Wind Power was the largest wind turbine manufacture in the world and Fayette manufacturing was the second largest. These companies are no longer around, although some of their turbines are still producing power today. Although the players have changed, the machinery is still pretty much the same. The main difference I see is due to more rotor swept area the turbines tend to make more power, and they have more complicated control systems. Other than that, the turbines still have similar maintenance needs.

I have worked with many different types of turbines that have been in a variety of configurations. They include upwind rotors, downwind rotors, active yaw, free yaw, pitched regulated blades, stall regulated blades, telescopic blades, fixed speed and variable speed generation — from battery chargers to utility rated wind turbines. No matter the differences, I find that the basic theory of operation of these turbines is still pretty much the same.

Since we are at the beginning of the year, a good point to start at would be with the basics. Let’s start with a review of “Wind Turbine Theory of Operation”. I find that if my technicians, operators and administrative staff understand what the turbine or wind plant is trying to do, that we can make the right decisions, plan the right maintenance, order the right parts and troubleshoot correctly for the turbine or the entire wind farm. When we understand this, we save money and produce more power.

Of course since you are all already in wind, it will be easy for you to answer the following question: What are the three main things a wind turbine is trying to do?

These three objectives are the same for the entire operating range of a wind turbine, whether we have no wind, less than rated wind, rated wind or extreme wind conditions.

The first objective of a wind turbine is to stay safe.

The wind turbine has sensors installed throughout it that are always checking to make sure the turbine is safe. There are oil pressure sensors, temperature sensors, speed sensors, position sensors, electrical power quality sensors, and many more sensors depending on the turbine manufacturers design. If any of these sensors find that the status of whatever they are monitoring is out of specification, the turbine typically resorts to safe mode. Usually safe mode is stopping the turbine from rotating, applying the brake system, and sending an alarm to a monitoring system and to the operating staff. The wind turbine is always checking these sensors to keep safe whether there is no wind to extreme wind conditions. Staying safe is the most important task a wind turbine has to perform. It is important to insure the turbine survives for its complete lifespan. Disabling or modifying a sensor that is related to a safety task can shorten the lifespan of a component or even destroy the complete wind turbine should something go wrong.

A turbine that is staying on its published power curve is considered to be performing correctly. Deviations from the power curve should be investigated and corrected. Some factors that can cause power curve deviations are damaged airfoils such as eroded leading edges, iced airfoils and soiled airfoils from bug build up. Other factors can be due to pitch system, control system, and yaw system problems. One of the most damaging areas of the power output of the turbine is in rated and above rated wind speed scenarios. There should be controls in place to prevent overpowering the turbine. Modifying these controls or set points can damage and shorten the life span of certain components in the turbines drive train, and the turbine itself.

The third objective is to point into the wind. Most turbines have active yaw systems that receive signals from the turbine control system. Typically, each turbine has its own wind speed and direction sensors. There are wind vanes that monitor the wind direction and anemometers that detect wind speed. On most turbines, these sensors are located on the top of the turbine. The sensors provide signals to the control system which then decides whether or not to yaw. If the sensors or set points are not properly maintained and properly aligned with the drive train of the nacelle, the turbine could be misdirected, not point into the wind and not catch all of the energy that the turbine is capable of capturing. Slight deviations in alignment of the wind direction sensor can cost you in energy production. In addition, if the wind speed sensors are not properly working the turbine may not point into productive wind soon enough. Damaged wind speed sensors may also allow the turbine to continue producing power in high winds that are outside the scope of the turbines operating environment.

That’s it. We have reviewed the basics of wind turbine theory of operation. By understanding this you and your team make better decisions to save and make more money.

Until next time remember, the wind doesn’t come back, make the most of it.